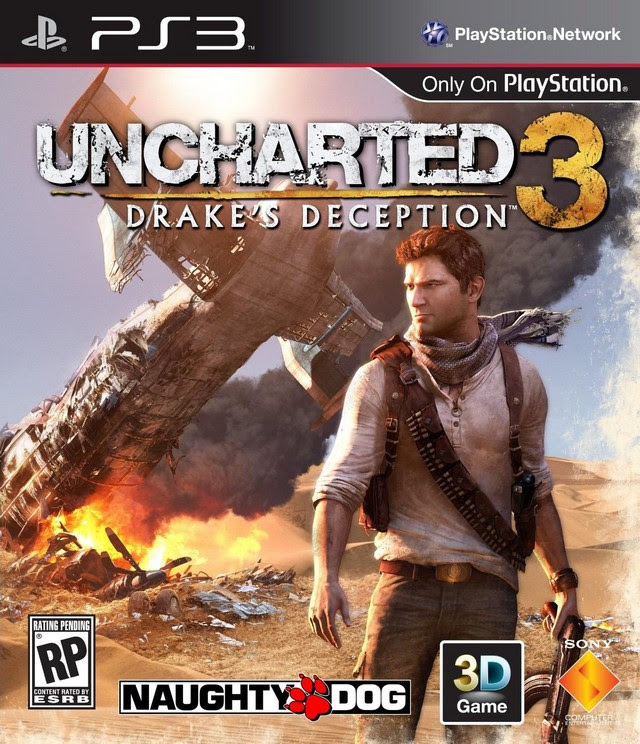 Another much-awaited game hits the scene, on it’s 3rd sequel, Uncharted 3 has a well deserved place in the modern 3rd person shooter genre. Unfortunately the PlayStation 3 is still unhackable when it comes for games with a firmware above 3.55 and this game, as .nfo states it, requires a 3.72 firmware on the console. It’s been some months and still no progres in this matter but maybe time will solve this issue. Maybe you’ll turn to the original version in which case i say the usual expresion: “Have fun!”.
A search for the fabled “Atlantis of the Sands” propels fortune hunter Nathan Drake on a trek into the heart of the Arabian Desert. When the terrible secrets of this lost city are unearthed, Drake’s quest descends into a desperate bid for survival that strains the limits of his endurance and forces him to confront his deepest fears.
Uncharted 3: Drake’s Deception is an action-adventure game played from a third-person perspective, with the player in control of Nathan Drake. Drake will have a large number of different animation sets, enabling him to react according to his surroundings. Drake is physically adept and is able to jump, sprint, climb, swim, scale narrow ledges, wall-faces to get between points, and perform other acrobatic actions.
Drake can now take on opponents in more ways than before: hand-to-hand combat with multiple opponents, contextual melee attacks, and new stealth options. Uncharted 3 also features expanded and diverse traversal moves with deep gunplay. Drake can be equipped with up to two firearms – one single-handed and one two-handed – and a limited supply of grenades. Drake can pick up weapons, automatically replacing the existing weapon he was using, and additional ammunition from downed enemies. The player can direct Drake to take cover behind corners or low walls using either aimed or blind-fire to kill his enemies.
The player can also have Drake fire while moving. If Drake is undetected by his enemies, the player can attempt to use stealth to take them out, such as by sneaking up behind them to knock them out with one hit, or by pulling an unsuspecting foe over a ledge from which Drake is hanging. The stealth mechanic has been simplified and improved.Some areas of the game will require the player to solve puzzles with the use of Drake’s journal, which provides clues towards the puzzles’ solutions. When enabled, a hint system provides gameplay clues, such as the direction of the next objective.
Like its predecessors, throughout the game there will be special treasures that may be hidden or in difficult-to-reach places that the player can collect. Collecting these treasures, along with completing certain feats within the game, is tracked by the awarding of medals, which gives the player in-game money to use to unlock special options; these include in-game bonuses such as alternate costumes, unlimited ammunition, buy new weapons, as well as upgrades for online gameplay. Also non-game extras, including concept art and making-of movie. All the money that players earn in the game’s story mode will be available for transfer to multiplayer, and vice versa. The statistics tracked for a large portion of the in-game medals are used to award trophies.
Features:
An interactive cinematic experience that blurs the lines between games and Hollywood films.
Nathan Drake’s journey will put you through new challenges and take you to stunning locations around the world, from a derelict chateau in France, to the merciless Arabian Desert.
Epic single player campaign with evolved signature UNCHARTED gameplay.
A new breed of Action Adventure Multiplayer that brings the exciting cinematic elements of the single-player campaign, into the multiplayer.
Experience the thrill of UNCHARTED in stereoscopic 3D
Similar to Uncharted 2, Uncharted 3 is planned to include a separate multiplayer component with network play that runs in open beta during July 2011, featuring competitive and cooperative modes of play. The beta features several customization options, such as different character skins, ability boosters, skill medals to attain, and a progressive ranking system. Uncharted 3 will introduce free-for-all modes such as standard deathmatch, character model and weapon modification, and dynamic environmental ‘events’ within multiplayer maps, similar to the set pieces from the game’s campaign – such as a hostile plane flying above shooting all players it catches in its crossfire. Collectible treasures are also said to be available within the multiplayer maps, which can be used as in-game currency for unlocking new characters, customization equipment and boosters. Unlocked customizations can either allow for changes to be made in character appearance, such as clothing and skin tone, or upgrading weapon attributes.
A Buddy System has also been implemented into multiplayer. At the beginning of each match, the player may be joined with a random partner or a friend if joining their game. The buddy’s emblem remains displayed as part of the player’s HUD to indicate their location relative to the player’s own on the map. With your Buddy, you can do a cooperative taunt over dead enemies you defeated together, and can also collect each others’ earned treasures for them. The player is able to spawn next to his buddy so long as the buddy remains alive and out of combat.
With the aim of making the multiplayer more flexible and accessible, several logistical improvements have been added, such as the capability to join games in progress or for two different PlayStation Network accounts to play together in split-screen multiplayer on a single console. In the event of ties or near-ties, matches enter an elimination mode as they wind down, in which the players are restricted to one life and must compete to wipe out all of the opposing team’s members first within the allotted remaining time.

Several new features have been included in the game, including mechanics that create gameplay situations designed to assist the losing team, improves ability enhancements and augmentations that must be purchased for each use, special abilities that are made available when a certain amount of medals has been attained within a match, and “Uncharted TV”, a small video window that appears throughout the multiplayer menus, creating a video that can be uploaded to Facebook, YouTube or the XMB. Multiplayer also includes a character creation system, allowing a user to extensively customise their in-game character. Co-operative multiplayer also returns from Uncharted 2.
Genre: Action Adventure, Platform, Modern Third-Person Shooter
Release Date: Nov 1, 2011
Platforms: PS3 Exclusive
Gameplay Modes: Single-Player, Multi-Player, Online & Split-Screen Co-op
Developer: Naughty Dog
Ratings: Metacritic: N/A
Uncharted.3.PS3-DUPLEX
1 Bluray | 45.42 GB | duplex-uncharted3
Region: Free
Folder pass: skidrowgames